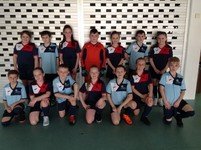 On Wednesday 20th March, some of our P6 and P7 boys and girls took part in the Belfast section of the IFA’s Futsal competition.

The groups games saw both teams coming away with 2 wins, 2 draws and 2 defeats meaning both teams finished 4th in their respective groups and qualified for the semi-finals. A special mention to Lewis Baker (P6) who scored all 4 goals in a 4-0 win against Lowood, a very difficult task considering the game lasted 6 minutes.

Every pupil who represented the school were excellent throughout the day and showed great sportsmanship. Everyone at Glenwood is very proud of both teams.

We use necessary cookies to make our site work. We'd also like to set optional analytics cookies to help us improve it. We won't set optional cookies unless you enable them. Using this tool will set a cookie on your device to remember your preferences.

Necessary cookies enable core functionality such as security, network management, and accessibility. You may disable these by changing your browser settings, but this may affect how the website functions.